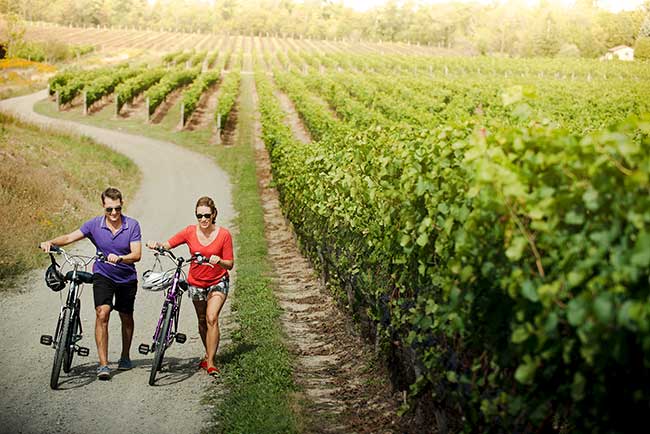 Bicycling is one of the most sociable ways to see the world. Whether you`re in a race or out cycling at a relaxed pace with friends or family, you see sights you just can`t properly take in from inside an automobile.

Especially in the fall, when the leaves are changing and the air has a comfortable crispness to it, there are few things quite as satisfying as a trip done on two wheels.

With its mix of small towns and cities and the rural stretches in between, Niagara’s roads offer an experience you just can`t get anywhere else on a bicycle. The region is better known for its tourism attractions, the casinos and wineries, but it is quickly making a name for itself among the cycling crowd.

You can go off the beaten track or you can follow one of the official trails set up for cyclists that course all through Niagara. The biggest is the fully paved Greater Niagara Circle Route, which runs for 140 kilometres passing by Lakes Ontario and Erie on the north and south, the Niagara River on the east and the Welland Canal on the west.
It`s suitable for riding, walking or inline skating and links several smaller trails: the local portion of the Waterfront Trail, at 15 kilometres; the Niagara River Recreation Trail (56 kilometres); Friendship Trail (24 kilometres); and the Welland Canal Parkway Trail (45 kilometres).

The Niagara River Recreation Trail combines a taste of the tourism environment with a more peaceful drive along the river that separates Canada and the U.S. Historic sites along the way include Fort George, the Chippawa Battlefield and Old Fort Erie – all vital sites from the War of 1812. There are plenty of rest stops along the way, too.

The Friendship Trail makes use of an old railway right-of-way, connecting Fort Erie with Port Colborne. It`s ideal for a relaxing ride, and along the way you can stop in Fort Erie, Ridgeway or Crystal Beach, or Port Colborne for a rest stop, to shop or have a little something to eat in a relaxed, small-town setting.

The Welland Canals Parkway Trail goes for 45 kilometres, mostly alongside the famous ship canal where you might travel alongside 30,000-ton ships between St. Catharines, Thorold and Port Colborne.

At Port Robinson, you can board the historic free ferry service that will take you on your way to Welland. There truly is a lot to see in Niagara beyond the iconic tourist destinations the region is more famous for.

For something a little different, there is the Niagara Wine Route that links more than 80 wineries all across the region. Admittedly, that’s a heck of a ride for a lot of people – Niagara is a very big region – but you don’t have to cover the entire distance, and most wineries offer rest stop services including a restaurant and visitor centre.

Bring your own bike or rent one here (there are several bicycle rental shops in Niagara that are easily found online). All of these trails were made with the average rider in mind, though serious cyclists will enjoy them as well.